Dr. Steve Edelson of Tampa Florida is the local expert on headache relief. Here is an article on how a medical doctor sought the help of a chiropractor for his headache problem:
Erasing Migraines: An M.D. Turns to Chiropractic

Stress, sleep deprivation and fatigue have been no small component of Dr. Michael Benson’s life. As a fetal surgeon, Benson is often up for 24- to 36-hour stretches at a time looking after patients. He has little time to rest or eat regular, healthy meals. It’s no wonder he has suffered from migraines for years.

Benson is not alone. It’s estimated that 28 million Americans suffer from migraines. As anyone who experiences these intense headaches can tell you, they can be extremely debilitating. Acute pain, possible visual disturbances and nausea, as well as sensitivity to light, sounds and odors can render a person incapable of going about everyday responsibilities, much less performing complicated tasks like surgery.

In order to cope, Benson has used Ibuprofen and heat to manage the pain, but sometimes it doesn’t work. “I used to keep a preloaded syringe of Toradol [a strong, anti-inflammatory pain reliever] in my medicine chest,” he admits, “because once my headaches get really bad, I get nauseated and can’t take anything by mouth. It saved having to go to the ER.”

Having trained as an M.D., Benson confessed that chiropractic treatment wasn’t in his knowledgebase or on his immediate list of pain-relieving measures. In fact, if he hadn’t been visiting his brother, a doctor of chiropractic, when a bad migraine hit, he may never have received chiropractic care. “The Ibuprofen didn’t work, so my brother offered to examine me and adjust my neck,” he says. “When you’re in pain, you’re willing to try anything.” Within 10 to 15 minutes of the adjustment, his migraine had disappeared.

It’s likely that Benson’s body reacts to stress by tensing muscles around the cervical joints in the neck, causing nerves in his neck to become impinged and triggering his migraines. Chiropractic adjustment alleviates this pain by relaxing muscles and promoting a full range of motion in the neck, allowing the headache to subside. And Benson’s positive experience isn’t uncommon. Recent studies at Duke University found that spinal manipulation was almost always immediately effective in relieving headaches originating in the neck and provided longer-lasting relief than commonly prescribed pain medications.

Benson’s migraines probably won’t go away completely without substantial lifestyle changes— changes that could be tough to implement with his profession. Once migraines are an established pattern, they are very difficult to get rid of, explains his brother. But he can work to minimize them with chiropractic care— a solution that doesn’t carry the potential side-effects of over-the-counter and prescription pain medication. Whenever a potentially incapacitating migraine hits and Benson gets an adjustment from his brother, “It always works,” he says.
Posted by Dr Steve at 5:34 PM No comments: 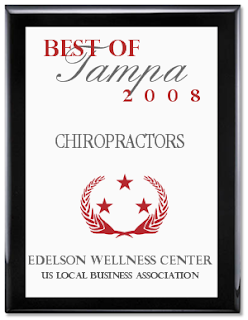 WASHINGTON D.C., July 10, 2008 -- Edelson Wellness Center has been selected for the 2008 Best of Tampa Award in the Chiropractors category by the U.S. Local Business Association (USLBA).

The USLBA "Best of Local Business" Award Program recognizes outstanding local businesses throughout the country. Each year, the USLBA identifies companies that they believe have achieved exceptional marketing success in their local community and business category. These are local companies that enhance the positive image of small business through service to their customers and community.

Various sources of information were gathered and analyzed to choose the winners in each category. The 2008 USLBA Award Program focused on quality, not quantity. Winners are determined based on the information gathered both internally by the USLBA and data provided by third parties.

U.S. Local Business Association (USLBA) is a Washington D.C. based organization funded by local businesses operating in towns, large and small, across America. The purpose of USLBA is to promote local business through public relations, marketing and advertising.

The USLBA was established to recognize the best of local businesses in their community. Our organization works exclusively with local business owners, trade groups, professional associations, chambers of commerce and other business advertising and marketing groups. Our mission is to be an advocate for small and medium size businesses and business entrepreneurs across America.

Get the correction, not drugs!

Press Release: Where to turn when you are in pain.
Posted by Dr Steve at 2:32 PM No comments:

If you have been in a car accident you need the best care possible. Call (813) 831-8321 in South Tampa. Dr. Steve Edelson will help you get back to pre-accident status fast! Press Release: Chiropractor Tampa Auto Accident.
Posted by Dr Steve at 8:43 PM No comments: 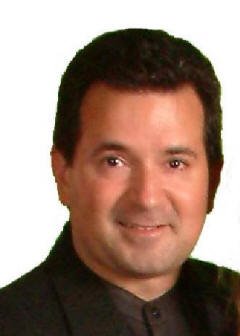